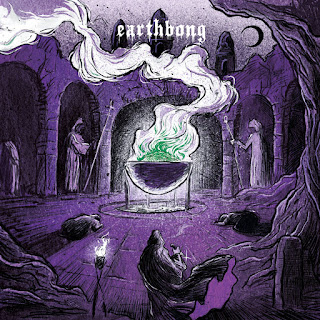 You can't help but admire when an artist fully commits to their theme, and Germany's Earthbong are 100% committed to worshipping at the altar of the green stuff. Their brand of stoner doom might have some of the best weed-themed song titles outside of Cannabis Corpse's albums, but Bong Rites isn't just a cut and paste tribute to their stoned forefathers. Earthbong's riffs are certainly very familiar, but they have developed a way of writing songs which takes ideas towards their longest and most drawn out extremes, and it's pretty fantastic.

Beyond the typical stoner doom riffs that make up the bulk of this album, there are also moments when the band can surprise you too; for instance in the opening track Goddam High, a couple of minutes after the band break things down into a quiet Sleep style jam the last thing I was expecting was for a grim true cvlt black metal vocal to start wailing into my ears; but that's exactly what I got. Whether or not it 'fits' isn't exactly the point, because when a band is producing music that is derivative from only a handful of sources, you need add some surprises every now and again to keep things interesting and unique, and Earthbong definitely do that.

Surprises can also come in the form of what is absent, or in Earthbong's case how long they take to fill that absence. It's a wonder how the band kept going with the soft jam that opens Weedcult Today for so long without giving into the temptation to kick things up into fuzz mode. After several minutes it feels like at any moment the track is going to explode like a green dwarf into a doomy nebula, and every second it doesn't is another moment for that primal tension to build; when that moment of supernova comes it's even more powerful for it.

It's pretty daunting going into the final track Monk's Blood knowing that's is a full half hour long, particularly when, unlike the first two tracks, it goes straight into fuzz riff territory with almost no warning. For the first time on the album we're delivered a distinctive melody beyond the riff, and it helps cut through the brilliantly lethargic and elongated opening movement. I'm once again impressed how a band can play a slow riff like this so many times over for such a long time before needing to change things up. There's undoubtedly a trance like effect to repetition in music, you find it in a multitude of different genre's inside and outside metal, but I often find that you need to already be in the right frame of mind to really enjoy this kind of repetitious sound. Or else you need to be in possession of a substance which might aid such indulgence... perhaps Earthbong could suggest something?

When the band do change things up, they sweep the heaviness right from under our feet, leaving a mellow jam with so much space in it it's almost scary. The band once again build things up in an equally protracted manner, carefully letting each inflection in the riff ring out, and by the time the roaring vocals come in you find yourself totally lost in the smokey ambience. A massive guitar solo follows whilst the track continues it's terrifying construction. Much like Bongripper, the accentuating details are minimal, and the major focus throughout is on the riffs themselves. That isn't necessarily a bad thing, but it does mean the riffs need to spot on from start to finish, and whilst I do find some of Earthbong's riffs quite familiar in this track, they are definitely engaging throughout.

It would be easy for Bong Rites to have come across like a crude gimmick, an attempt to duplicate albums like Dopesmoker or The Great Barrier Reefer in a way that can become a little tiring. Earthbong though have produced a very self-aware record, one that isn't afraid to embrace it's influences wholly, even if those influence are from a particularly narrow pool. If I were to put it quite simply though, this is a really good stoner doom record, and if you like that style like I do, you will undoubtedly enjoy this record. It's low, slow and heavy as hell and it takes you on an atmospheric and all encompassing journey into the realms that bands like Sleep, Bongzilla and Weedeater first opened the doors to. I do think Earthbong have room to improve, but it won't take much for these guys to take their brand of stoner doom to even greater heights.

Listen to Bong Rites by Earthbong on their bandcamp page