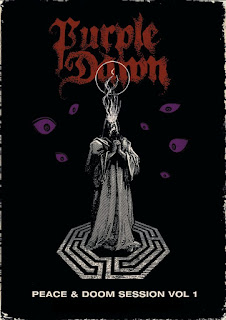 It feels rather appropriate that my one of last reviews of this crazy year should be of a live album, and particularly from a new band who faced the predicament of not being able to play their very first gigs because of the pandemic. In a year when live music has been completely devastated through most of the world, bands have had to use their initiative to give their audiences some aspect of the live experience, so I really applaud Purple Dawn's efforts in putting together such a great release. Peace & Doom Session Vol 1 consists of a live set on the A side, of which there is also a video on Youtube, along with three brand new studio tracks on the B side.

Purple Dawn's style is what you might call 'traditional' doom. It's heavy and groovy and errs on the slower tempos, but it's rooted in a time pre-Melvins and pre-Sludge, before punk and hardcore really got it's hands on the riffs of Sabbath. There's elements of old-school psychedelic rock here too, and a melodic style which, while quite dark and gloomy, is also more upbeat than most modern doom bands.

The live set kicks off with a wash of synths and a calming clean guitar intro, before jumping headlong into Goatthrower Part 1 (extra points for the quality pun!). The minimalist riff is huge, and the fuzzy tone of the guitar is thick and saturated in an almost dessert rock fashion. Utopia - Dystopia flows easily between Saint Vitus style 80s doom riffs and a more late 70s vibe that reminds me of early Motorhead. It also features some rather precise but not too flashy lead guitar playing, and the vocals from bassist Patrick Rose are excellent, offering depth and melody whilst still being full of gritty passion, a bit Troy Sanders-esque.

The Greed offers a more melodic and dynamic side to the band, it's jittering chug riffs keeping the listener constantly on their toes between the more soulful chorus riffs and clean guitar sections. The final section is fantastic, a real pounding head-banging riff overlaid with some grimy Kirk Weinstein style vocal lines. Atlantis, which also appears in studio recorded fashion on the B side, is a classic foot-stomper with the guitar and bass locking together brilliantly like Iommi and Butler in their prime. The drumming from Florian Geiling here is also completely on point, and some little flashes of staccato beats and rippling cymbals add an extra texture to the performance. It's definitely the most Sabbath-esque track on the album, but there's a few parts which clearly take some influence from 90s stoner doom too.

The band complete the live set by heading back into the filthy riff of Goatthrower, this time it's Part 2 which takes the riff into even doomier territory, and the fuzz gets so heavy it starts to evaporate into pure noise. As a live show it's pretty engrossing, and once these guys finally get on to the live stage I am certain they'll be a fantastic act to see. 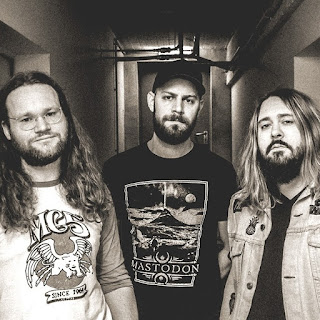 On side B we kick off with the very Windhand-esque Into The Shadowland, which varies throughout between warping chorus riffs and softer acoustic verses. The sound definitely has more depth to it, particularly in the layered lead guitars, but there is still a very visceral power and energy to it. The song has some real catchy melodies too, some that even remind me of the early Ghost albums, and it's the most well-composed track from either side of the record.

The instrumental track Verwunchen is definitely an oddity, and sees guitarist Timo Fritz having some fun, showing off his inner Brian Setzer with some jazzy and neo-classical guitar work. It's got some very creepy and darkly atmospheric moments to it, particularly when the heavy synths kick in around the half way mark. It's certainly an interesting listen, but I'm not sure it quite achieves the circuit breaker style interlude feeling which the band might have intended it to. The studio recording of Atlantis brings out a lot more force in the track, particularly in the funky bass intro, and the band are able to add some more nuances and details which the live setting doesn't quite allow. The vocals definitely come out more in this studio version too and the whole thing is overall more dynamic and intricate.

Whilst I really enjoyed the studio tracks, it was the live set that really endeared me to this album. The studio tracks definitely show that Purple Dawn have the ability to create catchy and memorable doom metal, and it also showed off a compositional style that is far more modern than the live set might give away. However, hearing a band play live with such enthusiasm and spirit in the face of adversity is a real joy, and at the end of this year there's nothing I want more than to feel the energy of a live show. If you're a doom fan in the same predicament, then Peace & Doom Volume 1 is a must listen.

Peace & Doom Session Vol 1 is released on December 18th via Ogorekords. You can listen, watch and find info about the pre-order from the label website here and Purple Dawn's bandcamp page here.